The following includes excerpts from "The Ark Plantation" by Greg Martin.

"The Ark Plantation" (also referred to as "Arke Plantation") was the home of John M. Tillman. The plantation consisted of approximately 3,200 acres of land and covered much of what is now Surfside Beach.

There are no records in Horry County of a deed for the property to John Tillman. It is possible that the Tillman family received a royal grant for the property prior to the American Revolution. If there was a royal grant, a record of this may one day be found in Charleston's archives. If Tillman acquired the land between the revolution and 1801, however, a deed would have been recorded in Georgetown, since what is now Horry County was during that time a part of Georgetown District. Any deed recorded there would have been sent to Columbia and, subsequently, during the War Between the States, destroyed by Sherman's troops when Columbia was burned.

The first evidence of Tillman living in what is now Surfside Beach is from the Robert Mills Atlas of 1820. There is also a survey of John Tillman's plantation recorded in Horry County that is marked a resurvey of an 1838 map. This map indicates a total of 3,194 acres stretching from the Atlantic Ocean about three miles inland and with about one and one-half miles on the oceanfront. This map shows the plantation house, several outbuildings and cleared fields. The home stood until the middle part of this century.

According to an article by John Thomas, in 1850 John Tillman owned 57 slaves. According to Tillman's own records, by 1860 he had increased that number to 60. His main crop was sweet potatoes, and he produced 3,000 bushels annually. One hundred ninety acres were used for the production of rice. John Tillman's will recorded in the Probate Court for Horry County reveals some interesting things about him.

At the time Tillman's will was written in 1854, he apparently had no wife or children, nor did he at his death in 1865. Mr. Tillman was apparently quite affluent, since he listed gifts of money, land and slaves to his brothers, sisters, nephews and nieces in his will. When Tillman died in 1865, the war had apparently taken its toll, since his personal property was valued at only $2,000. No value was placed on his real estate.

After Tillman's death the family divided the plantation, and eventually it was developed. First known as Roach's Beach, with only one two-story building and several cottages, the region was purchased in the early 1920s after surviving the hurricane of 1893. At that time, the principal industries were lumber and feed farming for horses and mules in the area. The new owner, Mr. George J. Holiday, renamed the area Floral Beach for his wife, Flora, and daughter, Floramay. In the late 1920s, a group from Columbia purchased and partially developed the land. In 1952, most of the land changed hands again and became known as Surfside Beach. The undeveloped beach area was covered with sand dunes and a one-lane sandy road that led from the highway to a quiet, family beach. 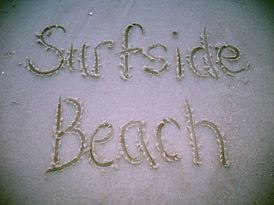 In 1954, Hurricane Hazel destroyed 18 of the beach's 65 houses, but did not dampen the spirit of the developers. Lots were cleared, the sand was leveled, topsoil was brought in and T. J. Harrison, who later became the town's first mayor, opened the first grocery store. At the time, there were only 6 permanent families living in Surfside Beach. Significant growth did not happen until after 1956, when Myrtle Beach Air Force Base was reactivated.

By 1964, Surfside's reputation as a family beach had spread significantly and the town was becoming a popular place to both visit and retire. During the ensuing years, the Township increased police protection and mosquito/sanitation control, and installed additional street lights. These improvements, along with the passage of strategic zoning ordinances, resulted in increased property values. Public parking and walkways to the beach were created and government offices were constructed just off Highway 17. Over the next few years, the Town of Surfside Beach, as well as the rest of the Grand Strand, became one of the fastest-growing parts of the country.